On Thursday I received a message via a fellow 2007 Sabeel-er that saddened me. The Tent of Nations, where we'd spent a day clearing rocks amongst their community, had that day received not one but nine demolition orders from the Israeli government. These orders are to remove: tents, animal shelters, a metal roof in front of two older houses, restrooms (shelters), water cistern, metal container and two underground renovated cave structures.

Daoud, who received the orders, said:
"The demolition orders were written in Hebrew and I refused to sign them. We have only 3 days to react against those demolition orders. The timing for delivering the demolition orders were plant properly and purposefully on Thursday, in order to make it difficult for us to try and stop the orders through the Israeli court within 3 days, because of the Jewish weekend (Friday and Saturday). The idea is to make it impossible for us to act quickly. I have contacted our Lawyer and he will write an objection and send it to the military court on Sunday morning. We hope to get a paper from the court through our Lawyer on Sunday morning to stop the demolition orders. We would like to ask you to be prepared and alert for actions, if anything might happen."

It's now Monday (I've been away since receiving the e-mail) and I'm not sure what's happened. But this community has already been through so much - fighting the encroaching Israeli settlement upon land that has belonged to their family for generations. These buildings which the government want demolished provide a base for a centre that provides education and support for Palestinian young people as well as informing people from all over the world about the political situation. They're not a threat - they're simply trying to keep what is rightfully theirs. 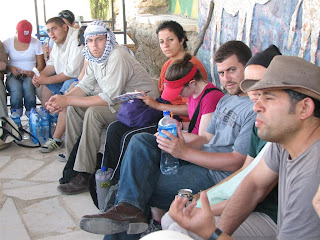 Listening to the Nassar family's story.
(Under one of the shelters whose demolition has been ordered.) 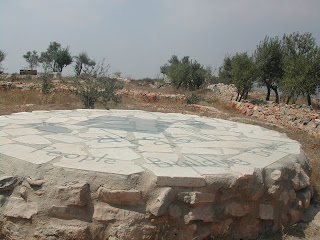 'People Building Love'
While thinking about this post while at the gym this morning, I overheard a news bulletin mentioning Israeli military action. A flotilla bringing aid to Gaza has been attacked and at least 10 activists (peaceful, unarmed activists) have been killed. It's an outrageous piece of unprovoked military action that is being widely condemned internationally. Friends of mine around the world are concerned for people they know who were on board the ship - these are innocent people trying to ensure that people can enjoy their human rights. Along the way they've lost their fundamental right to life. Currently, the Guardian are running a live blog as events unfold...
Posted by Liz at 14:28